Chet and I will be meeting with both the new and the outgoing Managing Director of the Scrum Alliance. I asked for input on Twitter, and have received some. Here, some thoughts.

I am fortunate to know many participants in Agile, on the Scrum side and outside Scrum, including most of the leaders and decision makers. While we do not always agree, I am pretty sure that none of them are actually evil or intentionally deceiving the world. At the same time, there are some serious issues around Scrum and Agile certification, notably the CSM. Here are some diagrams describing some of the forces that are in play. Let’s take a look.

First let’s take a look at a simple diagram of the best aspects: 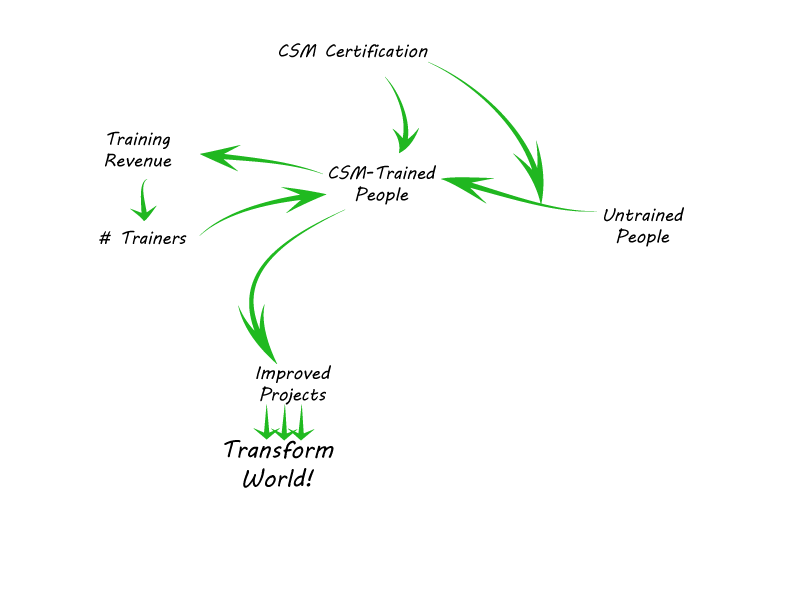 Above, we start with a simple look at the good aspects of Scrum’s CSM certification. This certification clearly induces people to move from untrained to trained: anyone who tries to sell a course without certification will see this.

Scrum teams generally get at least some improvement. (It is accepted by many of us that they do not get all the improvement they might. Yes. This is also true of my efforts in diet and exercise.)

As more people want to get the CSM certificate, training revenues rise, the number of trainers rises, the number of CSM-trained people rises, and more projects see some improvement. It is project improvement that enables the Scrum Alliance to “transform the world of work”.

I believe this is a fair picture of what happens around the CSM certificate. It is of course incomplete. Read on. 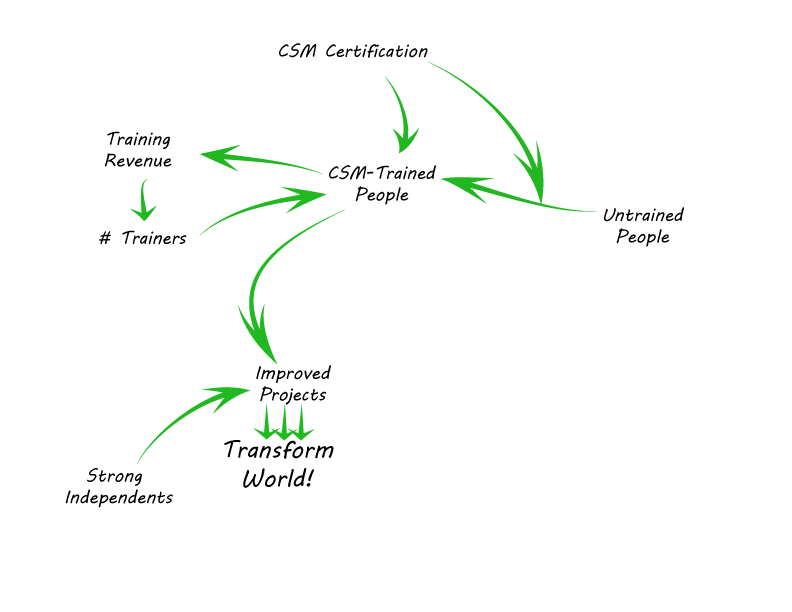 I note here that a strong force of independents in the market also improves projects, often quite substantially, and that therefore that strong force is important to the avowed goal of the Scrum Alliance, “transforming the world of work”. We’ll discuss the independents further, just below. 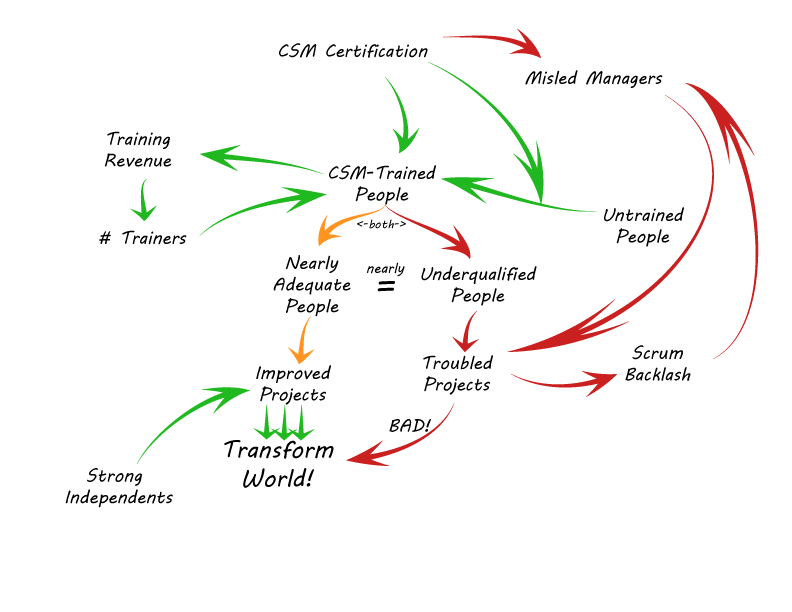 In the picture above, the most important aspect is in the center. CSM-trained people are at best nearly adequate to improve projects. Let’s face it: they have two days of training! Nearly all of these people could just as well be described as “underqualified”, and underqualified people lead to troubled projects.

A very large proportion of Scrum projects are fairly described as troubled. This is bad, because where Scrum doesn’t work well, we don’t really transform the world.

Meanwhile, at least some managers are clearly misled about the value of the CSM. We see this in ads for people that require it. We see it when a CSP is refused an interview because he “is not a CSM”. We see it when we visit projects and find managers expecting everything to improve just because they have some CSMs on staff.

Misled managers lead to troubled projects, because they do not have reasonable expectations and they do not understand how to deal with issues in Agile projects. Troubled projects lead to a backlash against Scrum, and to more misled and unhappy managers.

The weakness of the CSM “certification” works against all our goals, which is to help projects go better. Yes, the CSM works a bit toward that goal as well, but not nearly well enough.

But wait, there’s more. The CSM certification is strong in the market, arguably stronger than it deserves. This makes for inequitable competition with the offerings of people who can really help make things better as well. Look at the picture below. 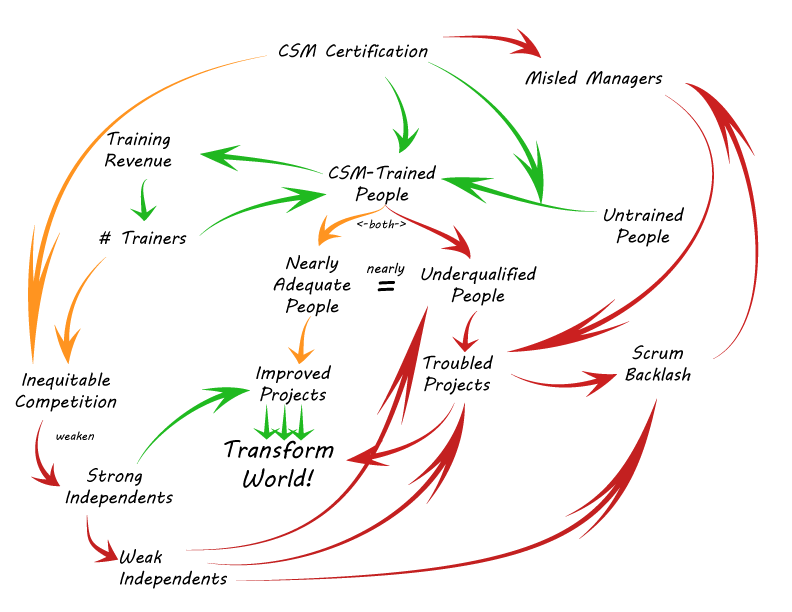 As we see above, the certification itself, and the Scrum Alliance’s army of trainers, competes more strongly against the independents than they may deserve. It makes them weaker, and less able to improve projects. The result of Scrum’s overwhelming presence is that underqualified people go without training, troubled projects go without coaching, and the independents rail against Scrum, due to the weight of the Scrum Alliance’s power.

There is one tiny hint of something good here. It is coaching. Look at the picture below. 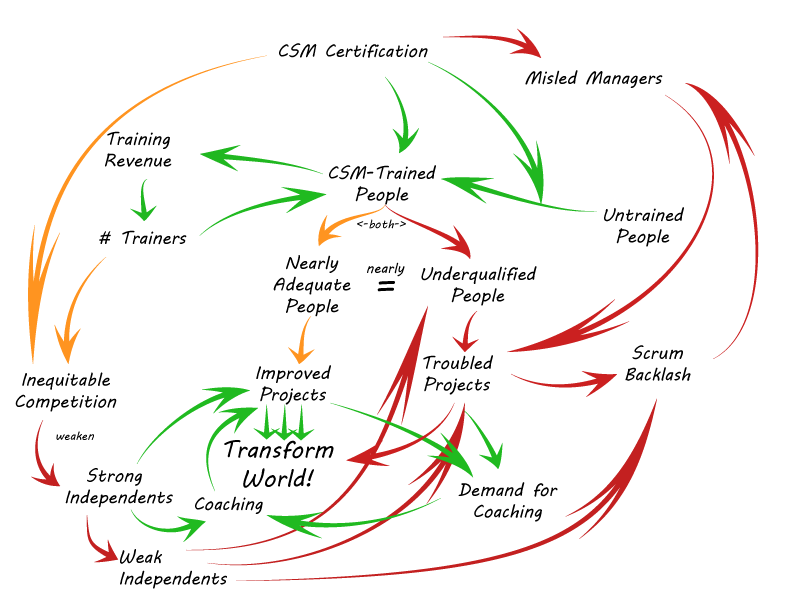 Let’s look for a moment at the summary picture: 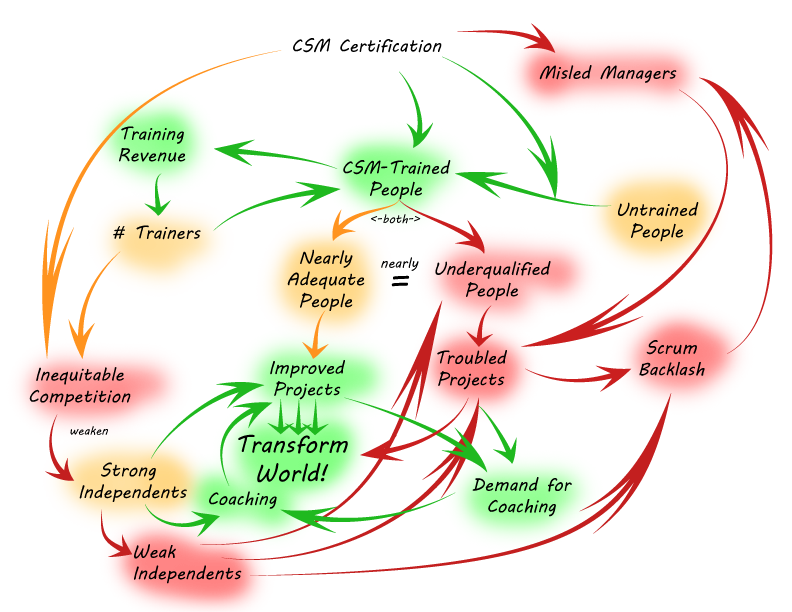 Most of the people involved are known to me, and again, they are not evil. They have been thinking, however, in terms of competing with other Scrum and Agile methods, consultants, and teachers. This would make sense if Scrum Alliance, and all your other companies, were just businesses.

Chet and I will be talking to the Scrum Alliance about this, but I’m also talking to all of you who read this. Scrum.org, ICAgile, Net Objectives, Big Visible, Object Mentor, all of us. We need to stop raiding each others’ camps and stealing each others horses. We need to find ways to show a common front, to expand our market, to work with synergy instead of with a win-lose attitude.

Let me offer hints at some things that could be done.

Notice that the coaching loop is important to transforming the world. The need for this is not strongly acknowledged by the Scrum Alliance, nor by any other agency.  It could be, and should be. There is plenty of room in the coaching market: most teams need it, few have it.

The coaching loop need not be limited to coaching. We already have stronger technical practices being offered to teams, from the Scrum Alliance’s own SA-REP (CSD) program, and from a number of independents.  What other support could be provided? Product Owner training? Operational Training? Software Recovery?

Extend Beyond Scrum and Agile

People will  argue all day whether Kanban, or Lean, or XP adds anything to Scrum or not. Thing is, the results are in: these ideas really help. If the Scrum Alliance, or the Agile Alliance, or all of us at large began talking in terms of synthesis instead of either-or, we would all prosper better. More importantly in my opinion, more projects would succeed and more people would be happier.

Despite the incredible art work (thank you, thank you very much), these ideas are just a first draft, though I hope a decent one. The point is to get everyone thinking about how to succeed. We cannot succeed by tearing each other down. We need to build each other up.

Get the hell to work. Take us forward!