When we went to the unit square implementation of PatterningSheet and ShotPattern, we stopped after the FitNesse tests ran, but before we modified our image-drawing spikes. Here, we complete that implementation and clean up the code as we do it.

After we changed to the unit square implementation, our image-drawing programs no longer worked. I’ll spare you the pictures: basically the entire drawing collapsed to a point in the top left of the picture, since the unit square is a pretty tiny part of a 2048x1526 picture. So we needed to get that code to work, and while we were at it, we wanted to make it a bit better.

It’s worth calling out this practice. Whenever a piece of code needs maintenance, it’s a good idea to schedule some of the clean-up that the code needs. Since our picture drawing code was very ad hoc, but quite simple, we were sure we could do the job quickly. Let’s take a look at where we started. Here’s our picture of the center of mass of the shot: 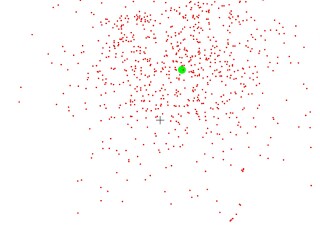 The second issue, of course, is that the code doesn’t do what we want. The Hits’ x and y coordinates are now fractions between zero and one, not integers between 0 and 2048 or 1536. So all the hits draw themselves in the top left corner. If you were using a pen, you’d wear a hole in the paper.

A moment’s reasoning told us that the change needed was simple. Since the internal x-value of a Hit is a fraction between zero and one, and since the output value is between zero and the width of the picture, the center of the hit, in the picture, should be at x*width. The width, in our case, is of course 2048. We brought those values out to the field level, along with some file and folder names:

We weren’t sure that this was the best idea, but we were sure it was better than writing “*2048” explicitly all over.

We also decided to improve some things. For example, in the code above, the dots for the hits are red, and they aren’t drawn centered around the hits, but instead their bounding rectangle has its origin at the hit. It did the job of showing that we could draw the picture, but it’s not accurate. In addition, we discovered that we preferred black dots for our final picture, and we decided we would do well to factor out the radius of the dots. The resulting code was this:

Now this does what we want, and it’s broken out into a separate method. That’s good. What’s not so entirely good is that there’s a lot of subtracting of the radius, multiplying the radius by two, and so on. At this point, we think it’s a little bit more clear in some ways, and uglier in others. We’ll keep an eye out for how to make it better yet, but we prefer it as it is over where it was all in line and multiplying and adding apparently meaningless constants.

It turns out that we changed almost every single part of the drawing in some detail. Chet wanted to use our prettier target with the crosshairs and rings, and he wanted to use a smaller round indicator of the center of mass, as we used in our other picture, this one: 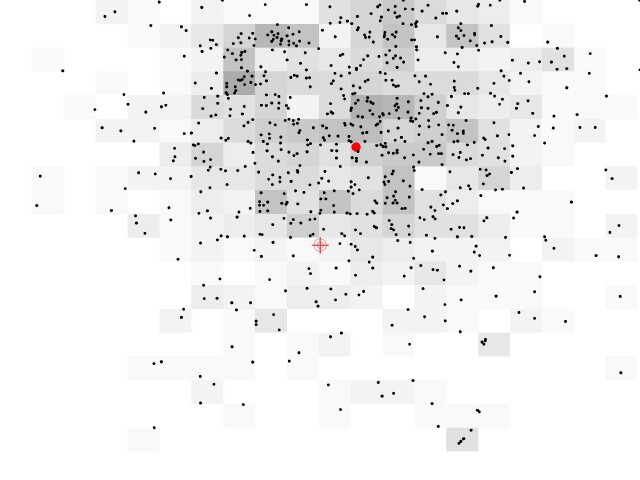 We made all those changes in the same three steps:

Naturally, as we did the steps, we tended to get more casual with experience, and then we’d have a picture with something horribly wrong with it. Then we’d go back to step by step, and get it right. If we were kids, we’d each have been sending the other one out on the new ice on the lake, to see when he would break through. Instead, we broke the code a bit, then backed up and made it work. 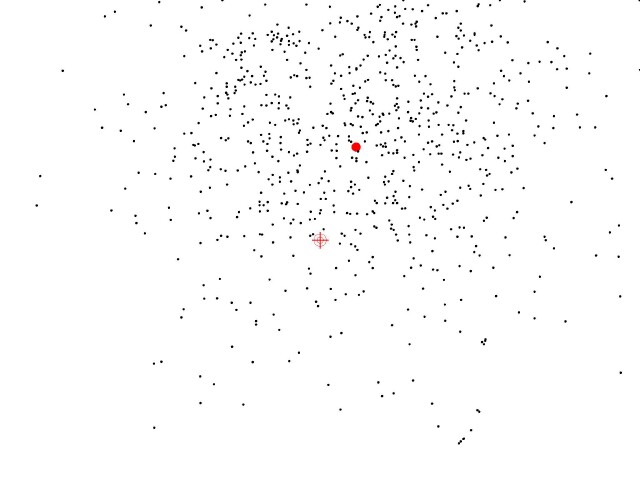 And here’s the code as it stands today:

This program is better factored, in that it has separate methods for the various things it draws. The code is now independent of the particular height and width of the page it draws, and it’s all lined up with the unit square implementation of the model. That’s good.

On the other hand, we clearly need a circle-drawing method to encapsulate all those subtracts and multiplies, and it would be nice to have something to factor in the width and height factors. Some of this can probably be done by putting some transforms into the Graphics2D instance, and some will perhaps want to be done with some private circle-drawing facility.

But that’s for another day. For today, the code is better – and more important: it works again!

Coming up next: an actual PDF report!