The Logitech io Personal Digital Pen remembers what you write or draw and then uploads it to your computer when next you plug it in. It must be good for something. How does it work? The paper has coordinates built in!

A Harmful Fascination with Handwriting

Ever since we had a Momenta computer long ago, I’ve had a fascination with computers you can write on. Of course I have a PDA. I also have a Clio, the next generation tablet computer after the Momenta. And I got that strange CrossPad Digital Notepad, a thick base you can put a tablet on and the base remembers what you write with a tethered pen. And Real Soon Now, I’ll surely get a new tablet machine.

But to tide myself over, I just got a Logitech io Personal Digital Pen.

The pen comes with a power supply, a USB cable, a docking station, a notebook of special paper, and a pad of special 3M Post-It Notes. There’s a CD (of course), and a few little manuals.

The basic idea is simple. Write on the special paper, and the pen remembers what you wrote. Put the pen in the docking station and it uploads what you wrote to a special application. Mostly the pen uploads “ink”, graphical stuff that looks like what you wrote. There are character recognition fields on the sheets where you can print keywords, subjects, or email addresses. Pretty straightforward.

The pen works using “Anoto Functionality”. You may have read about this idea a while back in the technical magazines. A nearly invisible digital pattern is printed on the paper. The pen reads this pattern as you write, and uses the information to retain the shape of what you write. Imagine the pen thinking “Oh, cool, we’re at 100, 100, I better remember that – oops, now it’s 100, 101, hmm, now 101, 102, we seem to be going up …”.

By convention, certain areas on the paper can be identified as character recognition areas, where printing will be recognized. Other areas are checkboxes. For example, the notebook that comes with the io includes checkboxes for e-mail, note, and other. If you check the e-mail box, that page of data will be added as an attachment to an email. Any subject: or to: information you’ve put in the recognition area will be put in the corresponding fields of the e-mail. So when the pen uploads, your email client pops up with a new email in it for you to edit and send. Checking “note” will open a Word document with the page in it as a graphic, so that you can type words around it and save it. “Other” will save the page as a JPEG to a directory of your choosing. We’ll look at an example in a moment.

What Can It Do?

After you install the CD, wire up the power supply and USB, and charge the pen, you are ready to go. The notebook has a couple of pages at the front where you fill in (twice), an upper-case alphabet and numbers and punctuation, to train the recognizer. The rest of the pages look like lined notebook paper, with a little section down at the bottom for Subject/Keywords and To. Finally there are checkboxes for E-mail, Note, Other, and Done. I’ve mentioned the first three. Done is kind of interesting.

When you draw a mark in the Done box, the pen and software basically version that page. Any actions, such as the E-mail check mark, will be done the next time you upload. If you write more on the page (you can see in the sample that I added to that page a time or two), and check Done again, the actions will be done again. The data will be saved in any case.

In the notebook, each page has unique coordinates. So the files are named like “Page011-11-20-2002.pen”. The pen knows you were writing on page 11. If you go back to that page after writing on others, the same file gets updated. However …

Notebooks Are Not Unique

No one could afford, I suppose, to print notebooks where not only was each page unique, but each notebook was different from every other. The Anoto Functionality would support that: the coordinate system is allegedly big enough to pave all of Europe and Asia with unique paper. But the paper industry isn’t ready for that. (And probably that’s not enough paper anyway …)

Instead, each notebook has a checkbox at the front, labeled New Notebook. When you change notebooks, you check this box, and the pen knows not to put that page 11 together with any other page 11s it may have created. However … the notebook id is also not unique, so if you go back to the first notebook, you must check the New Notebook box, and any edits to pages now show up as new Pen011 files. Also, if you forget to check New Notebook, then new work on a new page 11 will show up as edits on top of the old page.

Fortunately, there are some fairly easy ways out of this. Let’s look at an example. Here is a sample page saved as a JPG, where I’ve used “Done” twice. In the sample page, note that some of the writing is added in a second pass: the words “Added Later”, and the “Test” and scribble down below my name. The software can help us “back up in time” to remove changes like that. Essentially, we can bring up a “time line” on a page. As we slide the time forward and back, the material we wrote shows up bit by bit, in chronological order. So working from the first sample, let’s reverse time until those last edits disappear. Here’s the resulting picture. It’s a later picture, but it has only the earlier material in it.

In addition to the time line, there are a couple of additional features to help with merging and splitting. First, when you use the Done button, each bit of work goes in a separate layer that can easily be exported. Second, you can merge two pages, so if you are switching back and forth between notebooks, you can mush the pages back together.

Don’t answer yet! You also get a little pad of 3M Post-It notes in Anoto Functionality paper. These are not all unique, so you have to check the New Post-It Note box on each new one, to get a new file. I haven’t tried these yet, so I’ll do one now. Here goes:

Well, that’s not very interesting, except that the software displays the note on your screen like a little yellow note. The graphic file looks like the others except smaller: 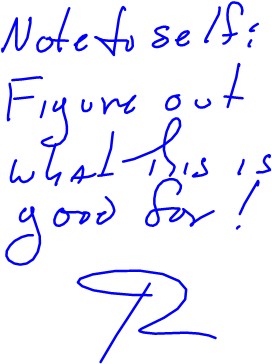 There seems to be a common theme with me and these devices, which you may have picked up subliminally from the samples. I think they’re neat but I can’t figure out what in the world they are actually good for.

I do a lot of handwritten material. I always carry 3x5 cards in my pocket and I write notes, book outline material, and such on them. I often work in a spiral notebook, and sometimes I’ll write an entire article that way instead of typing it into my computer. Sometimes I’ll do it because I don’t have the computer, and sometimes it just feels better to write than to type. The words come out differently when I write – more freely, less editing. I prefer that for some kinds of writing..

But I hardly ever need to preserve a page or card that I’ve written, and if I do, I probably want it preserved in typing, not my handwriting, of which you have probably already seen enough to last a lifetime. If I did want to preserve an original page, I’d just scan it on the scanner that is two feet to my right. That happens maybe once per notebook, or less.

I think I’ll carry the pen and notepad or Post-It notes around for a while and see what it does for me. Which leads me to my penultimate topic:

Is That a Logitech io in Your Pocket, Or Are You Just Happy To See Me?

The pen is huge. It is 6 3/4 inches long, and just over one inch in diameter at its thickest points. Here’s a picture of what it looks like sitting on its notepad. This is not a pocket item. We won’t even discuss its shape.

It’s an interesting product and a cool toy. The paper is a brilliant idea. Imagine a pen that was actually pocket-sized that remembered everything you wrote and fed it all into your computer. Imagine that it could recognize your handwriting. Suppose that it connected via Bluetooth to your cell phone and you could jot a note or draw a picture and send it to someone across the world. It has real potential

I congratulate Anoto, and Logitech, for bringing this product to market. I hope that they’re successful in future generations of the pen. This one has a ways to go.

If I figure out what it’s actually good for, I’ll let you know …