"Kate" puts a word in about how things really got started, and promises to come back and sort Ron out if he needs it.

Hi. My name isn’t Kate Oneal. I’m not going to tell you what it is.

Ron thinks his latest ideas will go better as a sort of business novel than as a dry textbook, and he has asked me to be a character in it. He seems to be painting me as more of a brilliant and dramatic figure than I really am, and I think he’s planning to make me even better looking in the story than in real life. How could I turn that down?

The company and people, including parts of me, are made up, though many of the events and people will be based on real things that happened and with people who are just like real people we all know. From time to time as Ron’s story unfolds, I plan to write a little first-person article like this one, where I’ll tell what really happened and what I really thought, in the real events the story is based on. I’ll put it all in terms of the story, though, as well as I can.

One thing you should know is that my husband wasn’t really killed in the auto accident. Maybe Ron plans to give me a romantic interest in the story, but in real life, thanks very much, I’m all set.

The accident was real enough. After recovering from that, I finished school with decent grades, and with a BS in (EE) Computer Science. With nothing else to do and no reason to go right to work, I decided to enter the Business School and completed first a BBA and then an MBA. This story begins after commencement the year I got the MBA.

On a lovely Spring day, I was sitting outside a coffee shop in my town, just enjoying the day and a cool drink. A car paused out in front and “Dan Devlin” made some complex series of gestures that I read as “stay right where you are”. I nodded. And that’s the last time I’m going to put someone’s name in quotes to remind you that the names have been changed to protect the innocent.

I had first met Dan, the owner of Oak River Software, when he came to the University to give a talk on starting and running a small business, and I had kept loosely in touch with him since then. He was a perennially cheerful man and seemed to be very concerned about doing the right thing by his people. So I was happy enough to see him on this delicious day.

Soon enough Dan came by from wherever he had parked, waved as he went in for a drink, and then emerged to sit down at my table. We exchanged the usual pleasantries, asked about our respective spouses, and then he got down to it.

“You just finished your MBA, didn’t you, Kate? What are your plans?”

“OK, did Dr Bentley sic you on me? He’s been after me to find something to do.”

“Well, Joe and I did have a chat, and he did mention you. But I’m actually here to talk about me.”

Dan looked down at the table. I had never seen him other than upbeat before.

“I had to sell off my main product line. The Catbird project we were working on never came in, and without it, we just couldn’t sustain the customer base. We’ve been maintaining the old package and such, but that contract is over in a couple of months and they won’t renew it. We blew through about five million dollars, and I’m tapped out.”

“Well, I kept hoping something would come up, so I never mentioned it. Besides, you have enough problems.” He glanced at my wheelchair.

“Me, problems? Life is good. David enjoys his work, we have the insurance money, and I might just go to school forever.”

“Not if Joe Bentley has anything to say about it.

“Anyway, Jim Anderson in Marketing and some of the people have a really good new product idea they’re calling Empire. I’ve been looking for funding and have one source that might match other investment on a one-dollar for every three basis. But that’s not enough.”

Dan held up his hand. “Not so fast mah littel pink frend,” he said. He was referring to one of my favorite pictures from icanhascheezburger.com, and to my skin’s tendency to burn whenever the sun is in the sky. 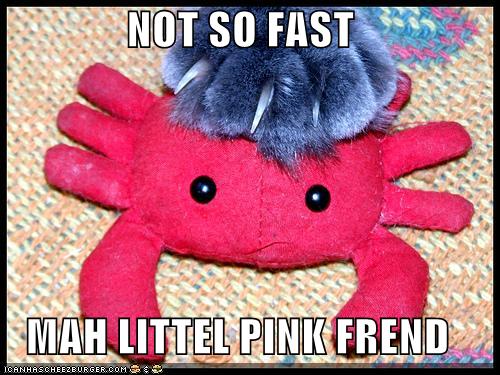 I laughed, and Dan went on. “The real problem, Kate, is that I can’t honestly ask anyone to invest. I don’t know what went wrong with Catbird and there’s nothing to stop it from happening again. I’m sure it was a good idea. I think maybe our software engineers just aren’t good enough but my gut tells me that’s not the problem.”

“Tell me more about what went wrong,” I said.

“The project just dragged on forever. Things took longer than we thought, then the market changed a bit, but we were on top of it and changed our requirements. So things took even longer. We missed a key date by a wide margin and had already committed a lot of money to advertising. Like I said, we burned through about three million dollars of the company’s money, and then two of mine.”

“Were you shipping anything?” I said.

“No. Between changing the requirements and getting it right, we never got anything out the door. Too bad, too, prospects were biting.”

“Well, have you heard about this ‘Agile’ stuff, Scrum and XP and all that?”

“Yes. Isn’t it just another word for hacking?”

“No,” I said. “I’ve read about it and even went to a small conference. It’s a very serious approach to software development, and it focuses on just what we need: getting a clear picture of what we can have and when, and being ready to go to market early.”

Dan smiled. “I noticed you said ‘we’. Does that mean you’re in?”

“I don’t even know what you want,” I said. “What do you really have in mind?”

We went on talking for a long time. I told him about Agile, and he told me about his people and a little about the new project. In the end, I agreed to go hang out at Oak River for a few weeks and to see what might be done. The idea was that if I liked what I saw, I could have as much control as I wanted over the project, and a piece of the company, in return for funding the project.

Even though it was a big chunk of money, I was sure I could at least contain my losses by following Agile principles, and with a little luck maybe even help make good things happen. I had no illusions about my actual ability, but I was young and smart and surprisingly interested in giving it a try.

So that’s how it all got started. I’m enjoying this fictionalized version of my life, so far, and I promise to step in from time to time to tell you what was really going on in my head.