The team has fallen far short in the most recent iteration. What should they do?

“Let me see if I understand, Carl,” Kate said. “In our last planning meeting, the team said that they would take on five stories? And now, at the end of the iteration, none of them are done?”

Gil jumped up. Carl, normally Mr Calm, jumped up. “Susan …” they said, as if in chorus.

“Stop! Everyone who wants to be a part of this meeting, calm down now. We have work to do!” Kate said, louder this time.

The hubbub continued. Gil and Carl and Susan were raving and the rest of the room looked shocked. Kate grasped a chain around her neck and pulled out her emergency whistle. She blew it, loudly. Sudden silence.

Kate smiled. “Thank you. Carl and Gil, please sit down. I want to explore this situation and to hear what you have to say. Susan, you may leave.”

“I want to stay. My concerns need to be heard,” said Susan.

“Susan, we are here to find out what happened in this iteration, and to do something about it. You seem to have some other agenda. You and I will discuss our concerns after the meeting. For now, you may leave.”

Kate relaxed her shoulders, almost visibly collecting calmness from the air around her. “OK. You may stay, but not another word. If you have a question or comment, write it on a card and give it to me. And find an hour on my calendar today: we need to talk.”

Susan frowned, nodded, and sat down. Kate sat perfectly still for a moment. Then it was as if she reanimated.

“OK. That wasn’t fun. Let’s not do that again. Any of us. I’m all for passion in our work and I insist that we keep the passion directed in a positive way. There are to be no personal attacks on this project, in my presence or outside it. Take a few minutes in silence and decide whether you can work that way.”

Susan moved as if to speak. Kate gave her a little head-shake. Susan subsided.

Gil raised his hand. Kate grinned, gestured a heart attack, then nodded and gave Gil a calming gesture at the same time. After a little time for thought, Kate started looking around the room, making eye contact with people in turn. She tilted her head as if with a question.

Jim Anderson looked her in the eyes and nodded. One by one, the developers, who had been silent anyway, nodded. Kate looked at Carl, who nodded. She looked at Gil, who clearly wanted to speak.

Glances were shared all over the room. No one had ever heard Gil say he was sorry before. Kate just said, “Thanks, Gil.”

Kate then looked at Susan for the first time. She held up her hand. “One word, Susan. Yes or no?” She dropped her hand.

Kate smiled. “You were supposed to write that on a card. But OK. Now please everyone take a short bio and calming break and we’ll start over. Back in ten minutes?”

Everyone nodded and got up to break. Carl said, “Can I bring you a Diet Coke, Kate?”

Kate said, “Thanks, you two. Gil, yes please.” Gil turned to go, and Kate gave Carl a friendly nod. After a moment he smiled and returned it, and left the room.

While she waited for the team to come back, Kate amused herself doodling on her Tablet. The picture on the wall screen took form: 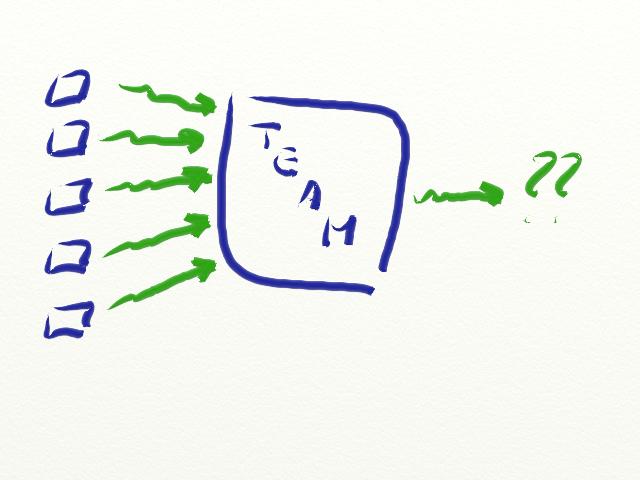 Kate had just finished this masterpiece when people started filing back in. Everyone was subdued, but there was a sense of energy. Gil put a Diet Coke in front of Kate.

Kate gathered up the eyes of the people in the room. “OK, as I was saying before the storm, we thought we were going to get five things, and nothing came out. We’re here to explore productively what happened, and to decide what we should do about it. Do any of you know of Diana Larsen?”

Carlos raised his hand. “She’s a coach. She specializes in retrospectives, and people-focused things.”

“Yes,” said Kate. “I once heard Diana say ‘A person is never the root cause of a problem,’ and I try to live by that idea. We need to look at what happened, and to figure out how our approach let all of us people down, then improve our approach. This isn’t a formal retrospective, but we’ll live by Diana’s guideline.

“So, as I understand it, we set out to do five features, and we got none of them done. Carl, what happened?”

Carl didn’t need any time to think. “We got lots done, Kate. Those five features are ninety percent done, maybe more.” All the developers nodded or murmured agreement.

Carl smiled ruefully. “Well, BG – can I call you BG? – if those are the rules, I guess I have to say Not Done. But darn it, we’re nearly there!”

“‘Kate’ will be just fine. Binary Girl is my job title, and we’re pretty informal around here. Let’s pretend for a moment that I was paying for this project.”

“But you are paying for the project,” said Susan, and then made a lip-zipping motion.

Kate laughed. “We’d better let you speak, Susan, or you’ll explode. But let’s keep it positive. You’re right, I guess I am paying for the project. So we shouldn’t have any trouble pretending.

“But my point is a larger one. We should all, always, pretend that we are paying for the project. Every week we have another iteration, and every week we have to shell out enough money to keep the team fed.

“Let’s talk about what it takes. You all know that I think of our product as made up of features. Oh, sure, we all know there are functions and objects and tests and databases and such in there, but to me, and to Jim and Susan, the product is a collection of features that we think will make us successful.

Everyone chorused: “That would be bad!”

Kate blushed and grinned. “I guess I do say that a lot. But it would be no pizza all around. That would definitely be bad.”

Somehow, at that moment, the pizza guy walked in.

“How does she do that?” Carlos asked.

“Ask me the secret of humor,” Jim said.

Kate smiled and nodded. “Timing. And the timing is always right for pizza. Let no one say I’m not a reasonable woman. Grab a slice and a soda, and let’s dig into the pizza and the problem.”

Fully unified against the pizza challenge, they did.

“OK,” said Kate, “the feature-buying lady has just left your feature store. She was a bit sad because she couldn’t buy any features. And you’re a bit sad because your children and kitties are going to go hungry for a week. What are you going to do? And remember, no recriminations.”

Jim raised his hand. “I’ve got a business idea. Let’s call the feature lady back and ask her which one of those features is most valuable to her. Then let’s finish that one first and maybe we can have it for her by Tuesday. She might give us the money for that one and we could keep going.”

Kate said, “Interesting idea, and I think we should explore later what if I said yes. But suppose I say that I only shop for features on Friday?”

Susan raised her hand, and Kate gave her a nod. “Jim, Gil? You said those stories are all ninety percent done? How accurate is that?”

Jim said, “I think it’s pretty solid. I really think we can get them all done in one more day.”

Jim looked at his developers. Those who weren’t looking at their shoes were shaking their heads. “OK, guys. How many? Show of fingers.”

The developers all showed two or three fingers, except Chuck, who was shielding his one-finger signal from Kate with his other hand.

Kate said, “Chuck? Your estimate seems out of line with the others.”

Chuck blushed. “How do you do that?”

Kate smiled. “I counted. You know, one, two, three. Was one your estimate, or your opinion of the proceedings?”

Chuck said, “My estimate, with a little spank for my conservative brothers and sisters here. I can finish my stuff in a morning, and probably help someone else finish up in an afternoon.”

“OK,” Jim said. “So we can finish these up in a couple of days. But Kate won’t buy stories on Tuesday, Susan. So what?”

Susan actually smiled. “So I was wondering why you … why we didn’t focus all our effort last week on just three or four of the features. Wouldn’t we have had enough time to get those done? Then Kate, um, the feature lady would have given us the money for at least three.”

“I would definitely pay for three or four,” said Kate. “Would that have been possible?”

The techies conferred, then Gil answered. “We could probably have finished three of those features. We might have finished the fourth, but probably not. But there’s a problem. Four of the stories had significant GUI work to do, and Alice is our only GUI person.”

Kate said, “Let’s ask Alice. I think she’ll know. Alice, are you really the only person who can do the GUI work?”

Alice said, “I’m most experienced with the GUI code, and I’m pretty good at the design side. I’m our most effective person at it, I think. But almost everyone can actually do it. So if someone else could have picked up the GUI work on the fourth story, they would probably be done by now, or maybe they’d have needed me to pitch in a little help for the hard parts. As it was, I only got three of the GUIs done.”

Kate said, “Let’s review, please. We undertook five stories. Three of them have their GUIs done. All of them have a lot done on them, only another day or two of work for one person, but none of them got completed.  There’s a general feeling that if we had focused on fewer stories, we’d have had three of them done, maybe even four. Right?”

There was agreement all around.

Gil said, “Do you want to buy some stories on Tuesday?”

Kate thought a moment. “No, I would like to stick to the rhythm. Let’s plan to do a full week’s iteration. I propose that the team sign up for the same five stories as last iteration, and get them done this time.”

Gil said, “Team, I think we can get those five done, and more. What do you think?”

Carl said, “Those five and about three more of the same size?”

Kate said, “Works for me.  Jim, Susan? Does that make sense to you?”

Kate looked around. “Good. You need three more stories of about the same size. Let me suggest a short break, and that we then reconvene to get three stories from Jim and Susan.”

To be continued ... after the break!