Susan Prior drops in on Kate to talk about some new products she would like developed.

“Hi, Kate. Yes. I’ve got some product ideas that I think we should invest in, and I wanted to talk with you about getting started. Dan is interested and said I should get your input.”

“There are three new products I’ve been talking about with my people and with customers. They’re all getting good reactions from prospects we’ve talked to. I think they would each bring us about a million dollars in the first year after release. I can show you the figures.”

Susan and Kate went over the figures, and talked about the three projects, which were codenamed Emerald, Obsidian, and Ruby.

Kate said: “The revenue looks good for each of these. What do you know about costs?”

“Gil and Jim looked at the specs and agreed that each one of these is about 15 person-months to develop.”

Susan said, “I have three people in Marketing who are working up feature stories. I would be the official Product Owner on all three, at least through first release. Development can free up six people soon. I’d like to get those six people committed to these projects for nine months to a year to get the products out.”

“Well, I figured in a little extra in case Gil and Jim under-estimated, or in case they are late.”

“I understand, though I’m not sure I agree. And why are you going for all the money and time for all three projects at once?”

Susan said, “These are all important and valuable projects. We should get them all under way right away.”

“You’re asking Development to work on all three of them at once? Two people on each or something?”

“No,” said Susan. “Gil and Jim say the critical mass for each product is five or six. So I’ll have the team work on all three products.”

Kate put on her confused face. “All three? Wouldn’t it be better to work on them one at a time? Most important first?”

Susan said, “No. They’re all equally important and equally valuable. They should get equal priority.”

“Well, as closely as we can tell,” said Susan. “Each of these projects takes about the same amount of time and will bring in about the same revenue flow. So they should get equal priority.”

Kate said: “Let’s test that thought. What if we could only afford one? What should we do?”

“I knew you would do this. This is my chance, and you want to wreck it. You’ve always hated me ever since the beginning.”

“Calm down,” Kate said. “I don’t want to wreck anything. And I don’t hate anyone. I can’t afford it, it poisons my soul. I just asked a question. What if we could only afford one? What would be best to do? Would you like to take a break to think about it?”

Susan steadied herself. “No, I’m OK. I’m just so excited and scared about this. These ideas are really good. They could make a difference to the company and I can show what I can really do.”

“I’d like that, too. You got off to a bad start with the team on Empire. But I know they are willing to work with you on this,” Kate said.

Susan asked, “You know? How do you know?”

Kate laughed: “I know almost everything around here. People tell me things. I think it’s because I spend so much time in the coffee room.

“Gil and Jim have both said, several times, that they respect your ideas and would like to see them get implemented.”

Susan calmed down some more. “They did? They never told me.”

Kate laughed again. “They’re programmers. They never say anything personal to anyone. It’s their job.”

“Good point. Anyway, if we could only do one, it should be Obsidian.”

Susan said, “Three reasons. It’s a bit simpler, the prospects we have talked to seem more enthusiastic about it, and we understand it better.”

Kate thought, then spoke. “Those seem like good reasons. Thanks. Now, thinking again about doing these as you propose, let’s look at some pictures.”

This time Susan laughed. “I knew I could never get out of here without pictures.”

“It could be worse. I could make you listen to me singing. OK. Let’s look at a nine-month plan.” 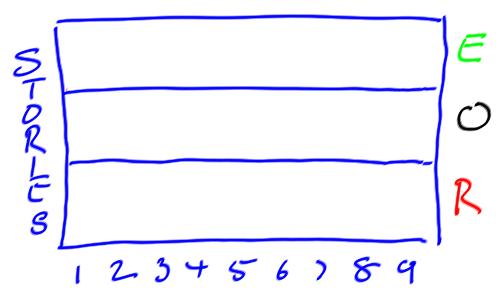 “OK,” Kate said. “Here’s a planning area. We have the three projects, Emerald, Obsidian, and Ruby. They’re all about the same size in stories, and you’re planning an ideal nine-month project. I won’t show any contingency here, just for clarity. OK?”

“Yes,” said Susan. “We may need the contingency, though.”

“Don’t worry, we’ll talk about that later. Now here is the way features will grow over the nine months, according to plan.” 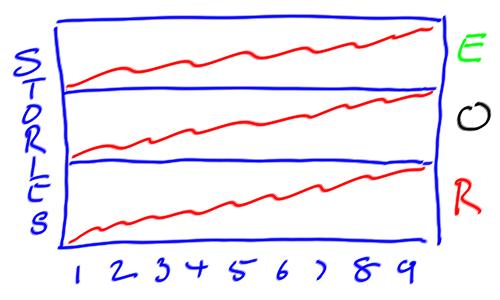 Kate went on. “The features all grow at about the same rate until the projects are all done after nine months. That’s the starting picture, agreed?”

Susan nodded. “Yes, exactly. The developers would work in parallel on all three products”

Kate said, “In parallel. Why is that good?”

“So we could see progress on each product.”

“And why do we need to see progress on each product?”

Susan thought. “Well, so that if anything goes wrong we can do something about it.”

“OK, I guess. Now when do we start making money from these products?”

Susan said, “If it goes according to the plan there and we don’t need the contingency, we start making money shortly after the nine months is up.”

“Well, we would have to roll them out with advertising, documentation and training and such.”

Susan said, “Well but what happens if  the developers are late?”

“You keep asking that,” Kate said. “In my view developers are never late. Products are late sometimes, but never developers. I suppose that sounds like crazy talk.”

“OK, we’ll defer that for a moment. Returning to the picture, we start earning money at three million a year, starting nine months out, is that right?”

“OK. Now take a look at this drawing instead.” Kate erased some lines and drew some new ones: 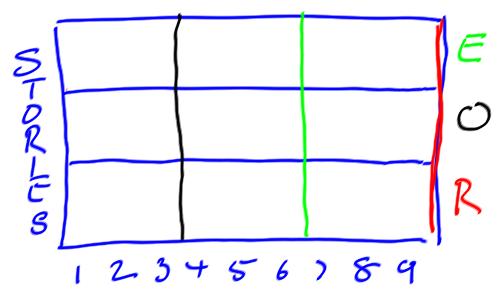 “Susan, now I’m drawing a picture of what happens if we do the three projects one at a time. The new vertical lines are three release dates, at three months, six, and nine.”

Susan said, “But what about contingency?”

“I’ve left that out, as I did in the previous picture. We’ll talk about it though, don’t worry. Now in this scheme, we focus the developers on first Obsidian, then Emerald, then Ruby. Look what happens to Obsidian development:” 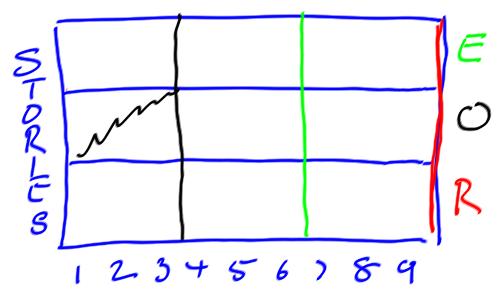 Susan said, “Yes. It gets done right away. But the others aren’t even started. That’s risky, isn’t it?”

Kate said, “I’m not clear on why it would be, so marshall your thoughts. But tell me what happens to company revenue with this scheme.”

“Well, we start earning after three months instead of nine.”

“Do we make more, or less, or about the same,” Kate said.

“About the same. Maybe more, because we are in the market sooner and might get more early adopters.”

“What about the impact on this fiscal year, and on our ability to fund projects?”

Susan scratched on a scrap of paper for a moment. “Well, we’d be to market six months sooner and in the first six months I think we get about 40 percent of the 12 months revenue for Obsidian. If we start right away, that would all fall in this fiscal year.”

“Yes! That would be $400,000 and that’s just about the low-end cost estimate for all three projects. What does that do to our concern about deferred risks for Emerald and Ruby?”

Susan thought. “OK, I see. Total cost of those two projects is scheduled to be less than $300K. Even if they completely failed, Obsidian’s first six months revenue would cover the costs. But again, what if development can’t get Obsidian done in three months?”

Kate smiled. “Go with me a bit longer while I finish this picture. Here’s the picture of the other two projects getting done sequentially after Obsidian:

“So here I’ve just assumed we’ll do Emerald next, then Ruby. It could be done the other way. So Emerald is done after six months. What happens with revenue there?”

“If things go according to plan, we think Emerald would bring in about 150K in its  first quarter out,” Susan said.

“Yes. So even that revenue is a big chunk of the cost of doing Ruby, and of course we’re already covered by Obsidian. So by the end of the three projects, we would see $500,000 in revenue, and it would all fall into this fiscal year. And the total cost of the projects you are asking for is around $375,000 if we use the development estimates. Even with six developers, we are looking at expenses of about 3/4 of 600K, or 450K for the nine months. See the difference?”

Susan stared for a moment. “Yes, sure. Done your way, the same projects actually break even this year or earn a small profit. Done my way, we spend $450,000 before we get anything.”

Kate said, “Let’s not think my way your way. Done in parallel, the projects burn through almost a half a million dollars this year. Done in series, they burn $150,000 in the first quarter, then start earning back, and we are back to even by the end of the fiscal year.”

Kate smiled. “If it was your money, Susan, which way would be ‘your way’?”

Susan said, “I get it. My way is to do this in series. That’s what I recommend. Yes, totally. I’m sure that’s what I meant all along. Serial.”

Kate laughed. “I thought so. It’s almost lunch time, are we done for the morning?”

Susan thought. “I think so, yes. I’d ask to have lunch with you but I need to think a bit first. I’m still worried about contingencies and risks.”

“Good,” said Kate. “I’d like you to think about that. As a hint, think in terms of what you can do as Product Owner to manage the risk. But keep in mind it’s your money, and you can just barely afford the $150K a month for your six developer team.”

“That’s scary,” Susan said. “I guess that’s what you feel all the time?”

“Well, it’s the problem I have all the time, Susan. But I’m not very scared. See if you can figure out why. When shall we meet again?”

“I’d like to come in again tomorrow, if that’s OK,” said Susan.

“You’re welcome, Susan, and thank you. We could use another three million in revenue.”