A comment from Alan Shalloway, on the Lean Development group, points the way to fame and fortune!

One of the many lists I frequent is the Lean Development group on yahoo groups. We’ve been talking about simplicity there lately, and in that context, Alan Shalloway said:

Seeing Mary’s response reminded me of something I have heard her and Tom say more than once. The easiest way to build something simpler is to not build things you don’t need. 64% of our software (by the industry) is barely used. The approach of building the 20% of the system that creates the greatest value (80%?) and then re-assessing and building the next 20% has several advantages. You add value to the customer quickly, you work on things people are more certain about, you increase your knowledge of what you are working on, you can re-assess and switch if need be, … Gee, and the main price you have to pay is to write automated tests (which speed things up anyway!).

This reminded me of one of the lessons that is drawn out in the Planning Game course I developed with Chet Hendrickson and Ann Anderson. We assume that a software product is written because, once shipped, it will return some value, every month thereafter. A number that is interesting is the cumulative “revenue” that you’ll get from that product over time. In our game, which Chet and I will be presenting at Agile 2006, we compare various product shipping strategies with respect to their overall value. 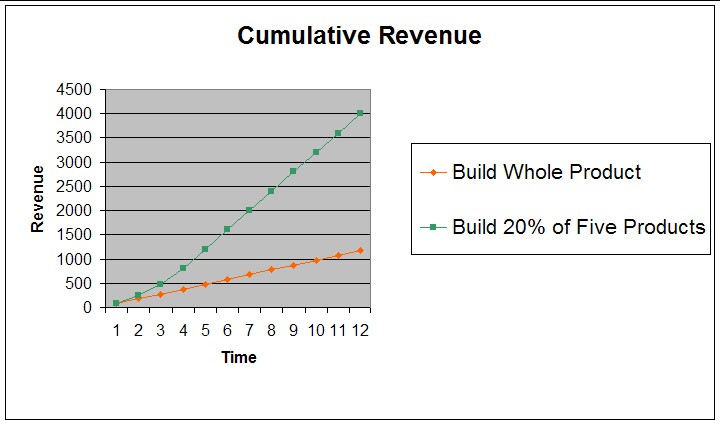 The discussion on the lean list is about simplicity. Alan reminds us that simplicity can lead to delivering more value sooner. How far can we take that? Can we really get to revenue growth that’s four times what we would get by filling in every detail of some product, long after the interesting bits are provided?

I suggest that often, we can. And remember … the first one to market with a decent product has a great advantage.

Just some food for thought.